Shore Capital is proud to have recently sponsored this year’s Deal of the Year (£10m and over) award, at the prestigious Northern Ireland Dealmakers Awards 2017. Now in its seventh year, the event is the most eagerly awaited in the region’s corporate finance community, and the awards are the most respected and sought after accolades.

The winner on the night for the Deal of the Year (10m and over) was the sale of the Retlan Group to CIMC Group, which was advised by ASM and Mills Selig. The Retlan Group, trading as SDC Trailers, is one of the largest trailer manufacturers in Europe, with 950 employees based at its main facility in Toomebridge.

The deal highlights that financial markets are open to strong companies in the UK, and represented the largest single investment by a Chinese enterprise to date in the whole of Ireland. It also further promotes Northern Ireland as an attractive place for foreign investments.

Commenting on the winner, Clive Black, Head of Research at Shore Capital, said: “Following all of the recent hullabaloo surrounding geopolitics, it is good to see well run businesses attracting high quality international capital. I hope that following this deal SDC Trailers goes from strength to strength, that it proves rewarding for the new investors, that local entrepreneurs flourish and international capital continues to find a very good home in Northern Ireland.” 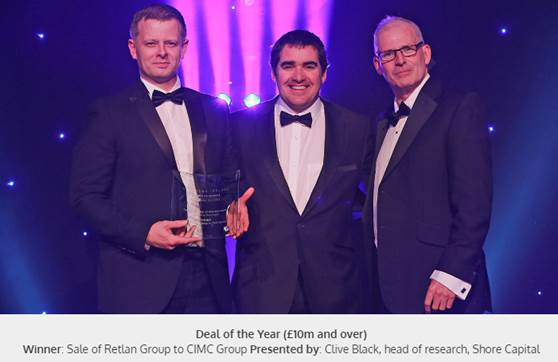